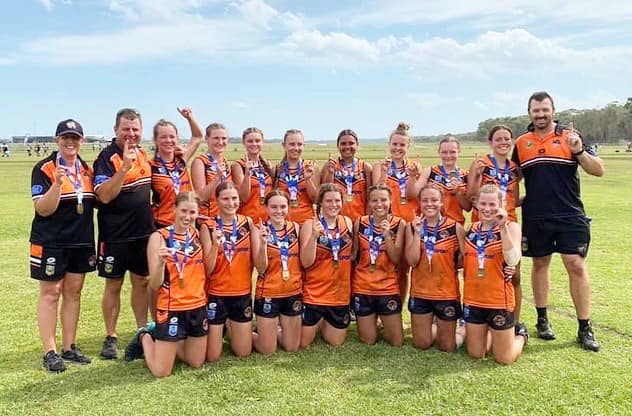 Orange Thunder’s campaign at the 2020 State Cup has proven to be a raging success, coming away with a Championship and a Runner Up from the annual December touch event which was played under different conditions than previous years.

With COVID restrictions causing some modifications to a typical touch football event format, which included ‘arrive play leave’ restrictions and playing back-to-back matches, these didn’t deter our Mens U20 and Womens U20 teams, who performed spectacularly all weekend.

Our Womens U20 team came through the pool matches finishing 2nd in their pool, which was followed by some tough matches during the finals series, including an absolute nail-biter against rivals Wallsend Wolves. The girls landed into the Grand Final coming up against the formidable Manly Sea Eagles outfit, who have imprinted their dominance in the 20s division for a number of years.

In a typically tough Grand Final, which went back to forth between the two teams, it was our Orange girls who came away as STATE CUP CHAMPIONS. This marks our clubs first State Cup title in our short history and it is especially pleasing considering the majority of players were aged between 15-17.

Our Mens U20 team were dominant in the pool matches topping their pool. After some difficult finals series match, including a thriller against Peninsula Piranhas, the boys too landed into the Grand Final coming up against the local Port Macquarie Makos outfit. The earlier matches seemed to have taken it’s toll on the side, who were beaten by the nippy Makos outfit in the decider.

Our club is incredibly proud of the efforts from both our 20s teams, coming away from the event 1st and 2nd in the State is a wonderful achievement from all.